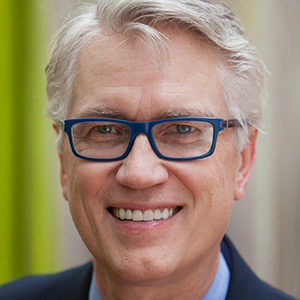 KENT THOMPSON has been Producing Artistic Director of the Theatre Company at the Denver Center Theatre (DCPA) for the Performing Arts since 2005. At DCPA, he has directed productions of Othello, Hamlet, Amadeus, Irving Berlin’s White Christmas, A Midsummer Night’s Dream, Other Desert Cities, A Flea in Her Ear, as well as several world premieres, including Just Like, by Karen Zacarias, adapted from the book by Helen Thorpe; stage adaptations of Kent Haruf’s award-winning trilogy, Plainsong, Eventide, & Benediction, among others. Three of Kent’s major accomplishments since moving to Denver have been the establishment of the Colorado New Play Summit (a premier national festival for new American plays, producing 25 world premieres in its first ten years), the Women’s Voices Fund (an endowment that supports the development and production of new plays by women), and Off-Center (programming designed to attract the next generation of audiences and artists). For 16 years, Thompson served as Producing Artistic Director of the Alabama Shakespeare Festival (ASF), where he created the Southern Writers’ Project, a new play program that presented 16 world premieres in Alabama and New York during his tenure. In addition to an active career as a freelance director, he has directed and/or taught in major conservatory programs, including The Juilliard School, North Carolina School of the Arts, Washington University, Boston University, Temple University, DePaul Theatre School, among others. In addition, he has led two major Master of Fine Arts Programs in Professional Theatre at the University of Alabama/ASF and at the National Theatre Conservatory at the Denver Center. Thompson served for eight years on the Board of Directors for Theatre Communications Group, (the national organization for not-for-profit resident theatre companies) and as its president for three years. In addition, he has served on peer review panels for the National Endowment for the Arts (also chair), TCG, The Pew Charitable Trusts, The Fulbright Scholars Program, The Wallace Funds, The Ford Foundation, The Doris Duke Foundation and The Andrew W. Mellon Foundation, among others. Thompson is a Phi Beta Kappa graduate of the College of William & Mary and holds an Associate Degree in Professional Acting from the Guildhall School of Music & Drama in London.