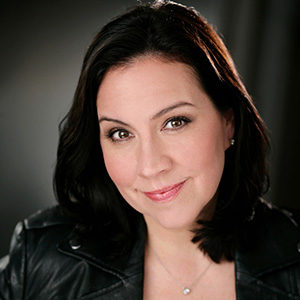 Kristen Anderson-Lopez is an Oscar- and Grammy-winning songwriter. Her work with her husband and writing partner Robert Lopez propelled Disney’s Frozen and its soundtrack to phenomenal success and acclaim, including not only an Oscar and a Grammy for “Let It Go,” but also a Lilly Award for Kristen, an achievement honoring remarkable women in American Theater. Before topping the charts with Frozen, Kristen and her husband wrote and produced music for the Disney film Winnie the Pooh and Finding Nemo, The Musical. She has done numerous short- and full-length musical adaptations for Theatreworks USA, and she’s the co-creator of In Transit, which opened to critical acclaim Off Broadway in 2010. This summer, Kristen and Robert’s latest project, Up Here, debuted at the La Jolla Playhouse.  Upcoming projects include a new Disney animated film, Gigantic, and an adaptation of Frozen for Broadway. Kristen lives in Brooklyn with her husband and their two daughters.